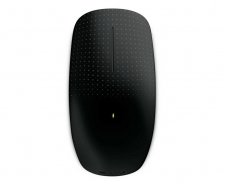 A superior multi-touch mouse for Windows

Touch Mouse brings a new dimension to Windows 7. By quickly responding to gestures, it helps speed up everyday tasks that are already fast in Windows 7: scrolling, panning, paging forward and back, docking, minimizing/maximizing, showing desktop, and more.

The making of Microsoft Touch Mouse

Two years. Dozens of experiments. Hundreds of prototypes. The passion and focus of teams on two continents. These are just a few of the things that went into the creation of the innovative Microsoft Touch Mouse, an interactive tool that makes doing almost every task with Windows 7 more intuitive.

In 2008, Hrvoje Benko, a researcher in the Adaptive Systems and Interaction Group at Microsoft Research in Redmond, Wash., had been working on a multi-touch handheld device prototype with his colleague Dan Rosenfeld. Meanwhile, a Microsoft Research Cambridge team, including Shahram Izadi, Nicolas Villar, and John Helmes, had developed an articulated mouse prototype. The two groups decided to join forces.

“We were all intrigued by the idea of merging the precision and pointing benefits of standard mice with the rich interactions that we had with multi-touch devices, such as Microsoft Surface,” said Benko. “We wanted to see if we could bring multi-touch interactions to the desktop without losing the keyboard or the mouse.”

Over the next couple of years, the team created many prototypes, five of which were shown at the Microsoft Research TechFest in 2009. The early versions of Touch Mouse included three types: camera-based, capacitive-sensing, and articulated (which used multiple existing mice linked together).

Ultimately, the researchers settled on the capacitive-sensing model, which has functionality similar to a touchscreen. Then came the testing of hundreds of forms and models with the Microsoft Hardware team, refining as they went for comfort and gesture interaction. The team built a gesture recognition engine, refined the sensor design, and continued to add enhancements over many months.

The result is Touch Mouse, featuring natural gestures including some of the most common tasks that people do with Windows 7, like opening and moving between windows and task switching.