Definition of Laptop: A laptop computer, or simply laptop (also known as notebook computer, notebook, notepad, and incorrectly labtop ;), is a small portable computer having its main components (Processor, screen, keyboard) built into a single unit capable of battery powered operation, which usually weighs 2-18 pounds (approximately 1 to 8 kgs), depending on dimensions, materials, and other variables. (Source Wikipedia)

It is debatable what the first notebook or laptop computer was. The first laptops did not look like the clamshell desings that are known to us today. However the first designs could still be carried with you and be used on a lap which has lead to the advancement of notebook style laptops. Outlined below are some computers that are classified as the first portable computer (laptop). 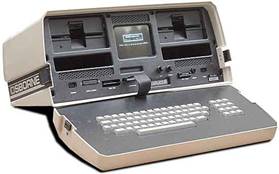 The Osborne 1 was accepted as the first true mobile computer (laptop, notebook) by most historians. Adam Osborne, an ex-book publisher founded Osborne Computer and formed the Osborne 1 in 1981. This was a mobile computer (laptop, notebook) that weighed close to 11kgs and a cost of $1795. The Osborne 1 had a five-inch screen, incorporating a modem port, two 5 1/4 floppy drives, a big collection of bundled software applications, and a battery pack. The computer company was a failure and did not last for very long. 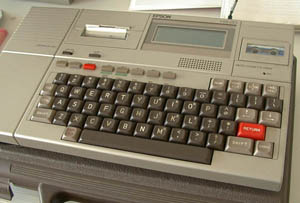 The Epson HX-20 battery powered mobile computer (laptop, notebook) was released in 1981. This mobile computer had a 20-character by 4 line LCD display and an integrated printer. It was an A4-sized computer weighing less than 4lb, with a full-size keyboard, integrated display and printer. Epson, during that time, planned its launch in the UK, priced below 1500. The Epson could run independently of AC power for 50 hours using its built-in NiCad battery cells which needed appoximately eight hours to fully recharge. The integrated inked-ribbon matrix printer was capable of printing graphics and upper- or lower-case characters on to plain paper rolls. The space to the right of the screen could have been used by either a micro cassette drive for application or information storage, or a plug-in ROM cartridge. The Epson came with 32K of ROM which had Microsoft Basic and the O/S loaded, and 16K of RAM. An optional expansion unit which clips onto the side of the case can hold an extra 16K of RAM and 32K of ROM. 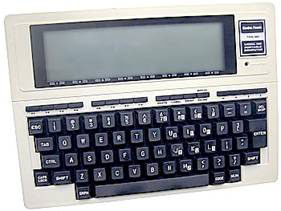 In 1983, Radio Shack released the TRS-80 Model 100 Mobile Computer (laptop, notebook), a 4lb battery operated computer with a flat design, having a more modern laptop look than its predecessors. The Tandy 100 was a computer made in Japan by Kyocera. All the ROM programs were written by Microsoft, and even a few of them were written by Bill Gates himself. These programs included a text editor, a telecommunication progam, which uses the built-in modem (300 baud), and BASIC. The operating system uses 3130 bytes of the 8 KB Memory. The CMOS Processor (80c85) allows the Tandy 100 to be used for 20 hours with only 4 AA batteries (5 days at 4 hours/day or 20 days at 1 hour/day). Its processor was also used on the Mars Pathfinder probe's Sojourner rover!

In February 1984, IBM announced the IBM 5155 Portable Personal Computer (laptop, notebook). This Portable PC was IBM's first carry around computer. It required AC power to be plugged in to work and weighed 13.6Kgs. IBM would seize manufacturing the 5155 laptop in April 1986. 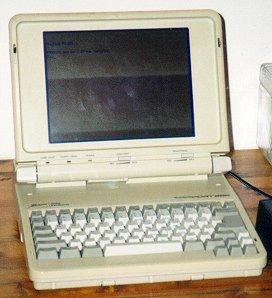 In 1989, Zenith Data Systems released the Zenith Minisport, a laptop computer weighing 2.7kgs. It is regarded by many historians as one of the early "real" laptops. It had a 20MB ESDI hard drive, 1.44MB floppy, 2400 baud built-in modem, 640K of RAM, and had a CGA "colour" LCD display. All connectivity ports were accessible via a door in the back.